Migrants and people seeking asylum are vulnerable to human rights violations based on their immigration status, gender, age, disability, real or perceived sexual orientation, gender identity or expression, race, primary language, ethnicity, and other status. Pregnant migrants and asylum seekers are at added risk of discrimination and adverse health outcomes.

For years, the United States has been placing pregnant people in immigration detention, often in the custody of CBP or ICE, where they frequently lack access to adequate medical care and face health-threatening conditions.

The prior administration’s attacks on women’s independence and availability of their reproductive health care were perhaps most acutely inflicted on women in immigration detention, as it has proven to be a barrier to reproductive justice. Reproductive justice, a human rights framework created by Black women activists and scholars in 1994, encompasses the ability to decide if a woman wants to have children or when and how a woman wants to have children and live in environments that allow for parenting with dignity. By declining freedom and bodily independence, the prison-like system is fundamentally incompatible with these principles.

The immigration detention system separates mothers from their families, denying them the ability to parent. It mistreats pregnant people and restricts access to abortion and other reproductive health care, interfering with the rights of detained people to control their reproductive lives and have healthy, positive pregnancy outcomes. Much like other injustices in the broader United States, women’s health and rights in immigration detention fall hardest on women of color, with disabilities, low-income women, transgender women, as well as young women and girls.

Under the new policy, Immigration and Customs Enforcement officers generally will not detain or arrest pregnant, nursing, or who had a baby within the previous year. The language in the policy will be gender-neutral, acknowledging that transgender men can give birth — another departure from past directives.

Immigration advocates welcomed President Biden’s new policy, which went even further than the 2016 version issued when he was vice president. However, like President Biden’s other immigration policies till date — all of which have been made through executive orders or directives and not codified in law — protections for undocumented pregnant and postpartum immigrants could disappear under a future administration, just as Trump rewrote for Obama’s policy. Though the new policy will affect only a small number of immigrants, it could irritate some conservatives who previously supported an effort by Trump to nullify the constitutional guarantee of birthright citizenship, in part to deter migrants from trying to get into the country to deliver babies.

Though the new Biden policy does not apply to pregnant, postpartum, or nursing migrants in Customs and Border Protection custody, Border Patrol agents are typically the first American law enforcement officials to encounter migrants who cross the border. They usually hold them for only a few days before transferring them to ICE custody. Guide To U.S. Spouse Visa – Things You Must Know!
0 replies 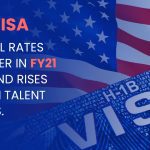