Do you have a spouse staying in the U.S. while you are in an overseas nation – waiting to get your green card? It is pretty natural to feel the desire to visit your spouse, but you might be wondering whether it is possible at all and whether the chances of getting your green card fast will get hurt due to that. The answer to this, similar to many other issues related to the laws pertaining to immigrating to the U.S., depends on your specific situation.

Can You Visit Your Spouse in the U.S. While Waiting For Green Card?

It is quite possible for you to visit your spouse in the U.S. while your green card application based on marriage is still pending. If you have to do that, it is necessary to submit an application for a tourist visa. However, before you go for this option, you need to understand the various risks and challenges involved.

At first, you have to convince an immigration officer that it is just for a short time that you plan to stay in the United States and would go back before the expiration of your tourist visa.

However, after that, there is another problem that you have to deal with. When you land in the U.S., you will be ‘inspected’ by a U.S. Customs and Border Protection (CBP) agent at the “port of entry” or border. You will be questioned, and you have to explain the reasons for your visit. Then, the decision to allow you an entry or ‘admission’ (as it is called) would be at the discretion of the CBP agent.

It is vital for you to note that you should never misrepresent the true reason for you to visit the U.S., either before a CBP agent/immigration officer or on an immigration form. Thus, you should not give misleading or false information to officials. Also, you should never lie about being married to a green card holder or U.S. citizen. Any misrepresentation could be considered fraud, and your application for a green card is likely to be denied in that case. An expedited removal order might even be issued, which could make you ineligible for an immigrant visa.

However, even if you have a valid tourist visa, there is no guarantee that you will get admission. In many cases, spouses who seek a green card get their entry denied at the port of entry/border when a CBP agent discovers that they have a pending marriage-based green card application or are married to someone living in the United States.

What Can You Expect?

Spouses of green card holders or U.S. citizens, particularly those with a pending I-130 petition (which is the first step to getting a marriage-based green card), frequently have to face more scrutiny. In case you use a tourist visa to visit your spouse, it could be suspected by the immigration officer in charge of processing your application that you are attempting to sidestep the process of getting a green card to shorten the time to be with your spouse.

Based on your situation, this is something that you can expect:

In case of an I-130 petition that is pending

You would be walking a tightrope, logically speaking, if you have a pending I-130 petition and are trying to visit the United States. You might like to stay in the United States permanently when you get a green card. However, at the moment, you have to convince the CBP agent/immigration officer that you do not have plans yet to settle in the U.S.

That can be tough if you have given up your job already and sold off all your property in your nation. Due to this reason, many people like to visit the U.S. before they do any of those things. Naturally, it is essential to present some strong proof that you have plans to come back to your home nation after your short visit. However, a risk is always there to have your entry denied. There is never any guarantee of admission.

In case of an I-130 petition not pending

If you have not yet begun the process of getting a marriage-based green card by getting an I-130 petition filed, there is no need to prove that you are not in a hurry to settle in the U.S. Still, you might have to go through extra scrutiny while applying for a tourist visa or at the time of arrival in the U.S. This is due to the reason that the CBP agent or immigration officer could have suspicions that you want to avoid the entire process of I-130 by trying to enter on a tourist visa and will then submit a marriage-based green card application after you have entered the U.S. already (which is referred to as “adjustment of status”).

In case you do not have plans immediately to live in the U.S. permanently, you should have a clear idea about that in your application for a tourist visa. Also, you might like to prove:

Also, you should never lie about whether your spouse is a green card holder or a U.S. citizen. If your lie gets caught, you might not be able to acquire a green card again in the future.

What Should You Do?

You should get in touch with a qualified, experienced, and knowledgeable immigration lawyer because your attorney would be familiar with the kind of situation you are in. You can get important information regarding visiting a spouse who is residing in the United States at a time when your application for an immigrant visa is still pending. Guidelines to Consider when choosing An Immigration Attorney 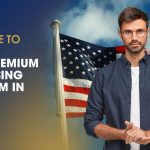 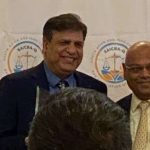 Naresh M. Gehi, was honored by the South Asian and Indo-Caribbean Bar Association...
Scroll to top